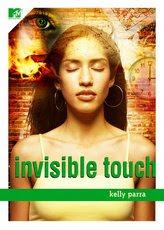 Summary:
Kara Martinez has been trying to be "normal" ever since the accident that took her father's life when she was eleven years old. She's buried the caliente side of her Mexican heritage with her father and tried to be the girl her rigid mother wants her to be—compliant and dressed in pink, and certainly not acting out like her older brother Jason. Not even Danielle, her best friend at Valdez High, has seen the real Kara; only those who read her anonymous blog know the deepest secrets of the Sign Seer.

Because Kara has a gift—one that often feels like a curse. She sees signs, visions that are clues to a person's fate, if she can put together the pieces of the puzzle in time. So far, she's been able to solve the clues and avert disaster for those she's been warned about—until she sees the flash of a gun on a fellow classmate, and the stakes are raised higher than ever before. Kara does her best to follow the signs, but it's her heart that wanders into new territory when she falls for a mysterious guy from the wrong side of town, taking her closer to answers she may not be able to handle. Will her forbidden romance help her solve the deadly puzzle before it's too late...or lead her even further into danger?

Review:
Wow--Just wow. This book was fantastic. I started it last night and almost got yelled at by the teacher because I couldn't stop reading during school. From the start with Kara's first blog entry to her last at Secret Fates, I was hooked at the edge of my seat. It was intense! Parra's writing was distinctive and literal. I just couldn't stop! Kara was a hard, and strong girl trying to live her mothers life after her dad's was taken away. Living with a secret she couldn't share that was tearing her apart. It was all so addictive.

Parra's writing was really descriptive and knowing. We knew every little detail, from the oak-trimmed mirror Kara looks at her dark circles under her eyes to the gray-stone counters her mother leans against while flipping through mail to the white plastic bowl Kara sets out full with milk for Faith, and that was what made her stand out, those little things really brought a different thing to the table.

Having the book take place in the Latina world was so surreal, with gang's on the streets and homeless people, the lifestyle Kara and Anthony both differently lived in made this novel so much more real then it already was. It was different, and it was gracefully done.

Kara was such a great character. Her paranormal abilities, her strength after her dad's death, her hope to be happy one day, it was gorgeously portrayed. Anthony was so strong and indefinite and his character just changed the whole course of the novel in a great way. The characters Parra created were three-dimensional and illustrated beautifully.

The mysteries and the paranormal differences were portrayed so distinctively and they were a big part of this novel, they are what is tearing Kara apart, what brought Anthony and Kara together, what brought the shocking ending to a surprising halt. It didn't feel unreal at all, it felt so natural, like anybody could have them and feel horrible and so unhappy about.

I had no idea where this novel was heading towards but I enjoyed how it started and definitely how it ended in the surprising way. Parra is definitely one to watch with more novels. This novel was a 2 thumbs up and there will be no dissappointment. I highly, highly recommend it as I gave it a ten out of ten.