ARC-The Blonde of The Joke by Bennett Madison 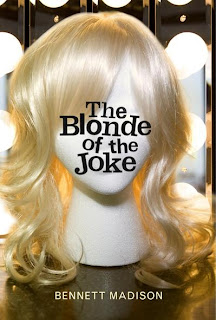 Summary:
Val used to have friends- really. But first one and the another moved, and soon she felt herself begin to fade away. That's when Francie Knight happened. Francie is that kind of girl. It's always the blonde, isn't it? The minute Francie calls Val's name at the mall-zing- Val has a near-life experience. She knows nothing will ever be the same.

Francie says that at the mall, you don't steal because you want it. You steal because it's yours already. When Francie happened was the moment Val had been afraid of. The moment she stopped being good- and started taking what she deserves.

Review:
Okay, before I start I want to let everyone know something. This book was given from First Look Teen in June, I think it was. (Not that I got it from them.) This book was supposed to be released early September of this year, but it got delayed until Fall 2009 so they can redo the cover above, which I may say, is a gorgeous cover, I have no idea why they would want to redo it. I don't know why, but it's true. Mr Madison himself told me. Okay, so now that that is clarified, on to the review.

I liked it. It was a very original story full of meaning and lessons. The atmosphere of the novel was interesting and dimensional. The thought behind the story was big and meaningful. Madison's writing style was unique and encouraging and very provoking and taunting to not stop reading. It was exquisite and I just absolutely loved Madison's style, it was very neat and exceptional and distinctive, I loved it.

Now, the only thing that I didn't like about this novel, really, was the characters, they were three-dimensional in the lightest sense and I just hated the way they acted to each other and to themselves. Val pitied herself throughout most of the book and when she changed it was so fast and quick it's like you didn't even see it happen, but it was there and then you saw it and it was big and . . . not her. Francie kind of seemed . . . unreal, and her character seemed like a joke, pun not intended. Her act was silly and she just didn't seemed like she was a real person--until she cracked.

This read is deep, strong, and original. Madison put strong thoughts and feelings in his writing, and we gotta give him extra credit for writing from a girl's P.O.V. so amazingly. This is an deeply memorizing read, and I recommend it when it comes out in a year.