You Had Me At Halo by Amanda Ashby 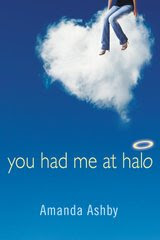 Summary:
Holly Evans has just seen her own body laid to rest. Now she would like to move onto the afterlife. But apparently she has some mortal baggage to unload first, starting with the matter of how she died. Her heavenly shrink isn't buying that she didn't kill herself-and says she must return to earth to straighten things out. The thing is, she needs to borrow the body of computer geek Vince Murphy to do it. Oh, and although Vince was supposed to have vacated the premises, he apparently never got the memo.

Now, Holly has forty-eight hours to resolve her issues while sharing arms, legs, and...other things...with a guy she barely noticed while she was alive. But the real surprise is what life has to offer when you have only two days to live it.

Review:
I was kind of shocked by how this novel played out. Some things I just want to share with you, first: Even though the book is for Young Adult's, the characters were actually in there early 20's. Holly was 22, actually. But the rest of it, minus the ages and the lifestyle, was completely young adults. Which was a nice change, something I didn't expect but ended up really liking. It was original. Second: . . . well, there really isn't a second, I just wanted to say that above and it would've been weird if I just stopped at the first one, and I'm rambling so just ignore this last part.

Okay, the plot was really original and finely crafted. Heaven was a interesting place, besides the fact that only like two short chapters were in Heaven, it still interested me, like most Heaven books do. I like the whole ability and the ideas about it and, yeah, it was enjoyable. It the first bit at least. The middle-ish, last-almost part of the book were considerately boring. Which is why it has taken me a week to read this, a WEEK!, but the beginning was interesting enough to grab me in and keep me reading through the boooorrring part, to the end, which was exciting. The ending was really enjoyable. I just fell in love with how it carried out.

The writing was neatly done, nothing spectacular but Ashby brings a great plot, with good writing and a great main character and supporting characters to the table and mixes it together and overall gives out a fairly awesome book with some sore parts to it. The characters were very entertaining, and along with the plot and originality, the best part.

Ashby brought something original and her writing has the potential to bring it big. I can't wait to read more of her works, check out her new book Zombie Queen of Newbury High out March 5, 2009. Anybody still not sure, think of Gabrielle Zevin's Elsewhere with a huge twist on earth.