Looking For Alaska by John Green 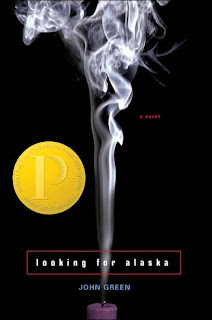 Miles Halter (Pudge), the novel's protagonist, is fifteen years old and what parents and teachers would call a good kid. He's chicken-legged skinny, undeniably bright, and a bit of an idealist at heart. In addition to having a penchant for remembering famous figures' last words, Miles gets wrapped up in the significance of those words enough to leave his sheltered home in Florida in order to seek out Rabelais's Great Perhaps --- which oddly enough, translates into going to boarding school in rural Alabama.

There, he befriends a ragtag group of early teens, including his boisterous roommate, appropriately nicknamed the Colonel; Takumi, the soft-spoken and musically inclined Japanese whiz kid; Lara, the gorgeous and mild-mannered Romanian; and Alaska, the sexy, fly-by-the-seat-of-her-pants leader of the group. For a while, not much happens to push the plot along aside from these characters' occasional mischief, i.e. getting busted for smoking cigarettes on campus, drinking liquor in their dorm rooms, sneaking out after curfew, and the like --- harmless behavior with harmless consequences.

Alaska Young's death. In an up-close and personal manner, the details of Alaska's last moments are chronicled through the eyes of Miles and his pals as they struggle to understand how something so unthinkable could have happened in their intimate community. Was it an accident, or did she kill herself in a selfish attempt to plow her way out of the labyrinth? Could her friends have stopped her, knowing what they knew about her past? Would life ever be the same, now that Alaska was dead?

This novel was good just not great. I felt the author, John Green, didn't capture teenagers all that well. The characters weren't very believable and it just didn't do it for me. I would of thought the reason for what had happened to Alaska would of been something really big. Mind-blowing big. But it was just about something she had forgotten. I don't think I'll be reading another one of his books. 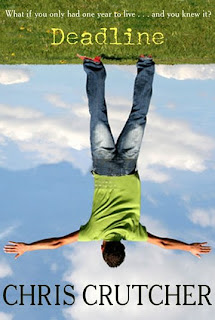 Ben Wolf goes in for a routine physical at the beginning of his senior year. He walks out with a year to live and some big decisions to make:

I walked away understanding I have a rare form of whatever the hell it is and without treatment my chances sucked, but with it they still sucked and somehow I knew my chances aren't about living, they're about living well. I wouldn't recommend this for anyone else, but I'm not going out bald and puking. I don't have anything to teach anyone about life, and I'm not brave, but I'd rather be a flash than a slowly cooling ember, so I'll eat healthy food, take supplements, sleep good, and take what the universe gives me.

And I'm turning out for football.

Not only does he decide to forgo treatment -- he decides that he wants his last year to be as normal as possible. So he doesn't tell anyone. His parents, his brother, his coach -- no one.

This book was really great. Ben Wolf has such a witty personality and such humor. Anybody would love reading his thoughts. I laughed and I cried. This book made you think: "What If?" and really thought about how something big and simple at the same time could change your life in one moment.

You'll follow Ben through his senior year of High School and the changes he makes in his self and how he helps someone you wouldn't expect. Ben tries to find himself in this last year for him to live.

Living in a small town myself I can catch similarities in this book. The way Ben does to make the most of his last year on Earth makes you think that: Yes, your life could change in a moment so make the most of it.

While reading this book I definitely said I would read more of Crutcher's books. I would recommend this book to anyone who is trying to find themselves and basically anyone else. It was a great book. I highly enjoyed it.

Missing You By Meg Cabot 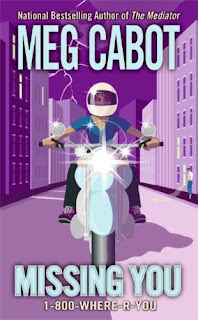 All Jessica Mastriani—a problem teen, according to her high school guidance counselor—ever wanted was to be normal. But that changed during a walk home on a particularly stormy day. And suddenly, Jess realized she never knew how good she’d had it before.

Becoming known worldwide as Lighting Girl—a psychic who could find the location of anyone, dead or alive—Jess had no choice but finally to embrace her lack of normalcy, and eventually ended up lending her newfound talent to the US government (not to mention selling her life story to Lifetime to make into a television series that is currently funding her tuition at Julliard).

But her work for the government during the war takes a terrible toll, and Jess returns from overseas a shadow of her former self, her powers gone, Lightning Girl no more.

Starting over in New York City, intent on finding a new life at college, Jess is less than happy when Rob Wilkins, her ex, shows up unexpectedly at the door of apartment Jess is sharing with her best friend Ruth.

But how can Jess, her powers gone, find anyone—let alone the sister of a man she once loved (and believed—however erroneously—loved her back)—when she can’t even find herself?

This is the fifth and final book in Cabot's 1-800-Where-R-You series. I've only read this book once before and I cried. I was excellent. It ended in the only way I would have thought. When I read it again I noticed a bunch of other things. Like how Cabot writes, blank blank blank. blank blank, I mean. She says this a lot in the book but I don't really care. The book is the perfect ending to Cabot's best series. Jessica Mastriani and Rob Wilkins relationship is a great touch. Jess' personality is superb. I just really love this book and the series, also. Great job done Ms. Cabot.

Like a modern-day Cyrano de Bergerac, Elisa ghostwrites love notes for the boys in her school. But when Elisa falls for Theo Moses, things change fast. Theo asks for verses to court the lovely Lila—a girl known for her beauty, her popularity, and a cutting ability to remind Elisa that she has none of these. At home, Elisa's father, the one person she feels understands her, has left on an extended business trip. As the days grow shorter, Elisa worries that the increasingly urgent letters she sends her father won't bring him home. Like the undercover agent she feels she has become, Elisa retreats to a pond in the woods, where her talent for ice-skating gives her the confidence to come out from under cover and take center stage. But when Lila becomes jealous of Theo's friendship with Elisa, her revenge nearly destroys Elisa's ice-skating dreams and her plan to reunite her family.

This book was fantastically written. The whole book was like a poem. It was truly great. I am not saying that I truly enjoyed the book, but it was good. It wasn't what I expected. I expected a bit more dialogue. It was more descriptive then anything else. I think the Kephart can write and I will most likely read more of her books. I think whomever likes poetry, metaphors, and similies will like this book.