The Bermudez Triangle by Maureen Johnson 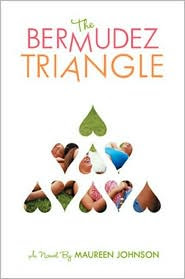 Summary:
The Bermudez Triangle is...

Nina Bermudez... who TiVos every episode of Trading Spaces and What Not to Wear because watching people rip down bad decorations, cast aside bad clothes—these things soothe her.

Avery Dekker... who worships Jack Black but has learned to play Billy Joel’s “Piano Man” by heart just so that she can hate it in detail.

Melanie Forrest... (a.k.a. Mel), who inspires guys to develop instantaneous, epic crushes—the kind that cause them to want to iron their clothes and listen to the lyrics of slow songs.

Since coming together at the age of eleven, the Triangle has never been apart. The summer before senior year, however, Nina goes away to a summer program in California. When she returns, she expects to be welcomed back into her friends’ arms with great excitement. Instead, something has changed in the Triangle—Mel and Avery are acting strangely. There are in-jokes Nina doesn’t get, pauses in the conversations that seem to be full of some meaning that she just can’t grasp. She’s suddenly an outsider, and she has no idea why.

Until she wanders into a dressing room and finds Mel and Avery kissing. What exactly do you do when your two best friends in the entire world start dating?

Review:
Oh, Maureen Johnson. I have had mixed feelings about her books always. I first read The Key to the Golden Firebird and really liked it. Then I got 13 Little Blue Envelopes, and I never caught on to it so it left to the library unfinished, then Girl At Sea, which I absolutely loved, as you can see here. I then got Devilish, and like with 13 Little Blue Envelopes, it never caught on and went back to the library unread. So, I really didn't know about this book, but, as you can already tell, I finished it, so that's got to say something, right?

The Bermudez Triangle, started off kind of slow, then it sort of sped up, but not really. Then it slowed down again and never picked up. Generally, this book was not exciting at all. It was slow, very slow, and boring in a few parts. But, but . . . it was interesting enough to keep reading and to know that it was a pretty good read.

The characters were very well-rounded and fit distinquished individuals. The book and the format of the novel were put together well and it was easy to follow through the story and it was fairly enjoyable.

Johnson's writing was flawed, but it was readable (Jeez, I hate that word! Why do I use it?). I didn't much enjoy the point of view, I wouldn've most rather it have been from first person through alternating chapters.

Okay, in all, this novel was good, not great, and it could've definitely been much better. I liked it, and it was enjoyable enough and I would recommend it if you want a long and quiet and sloooow read. So that's that.