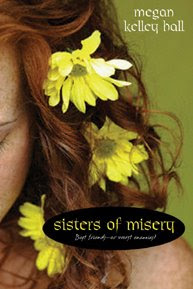 
Summary:
There are some girls who have everything.

She has the right clothes, the right friends, and the right last name, but fifteen-year-old Maddie Crane sometimes feels like an outsider in her clique in the wealthy, seaside town of Hawthorne, Massachusetts. And when her gorgeous, eccentric cousin Cordelia LeClaire moves to town, Maddie is drawn toward her ethereal, magical spirit and teeters even more toward the edge of her friends' tightly-knit circle...

Then there are the jealous ones.

Kate Endicott and the Sisters of Misery-a secret clique of the most popular, powerful girls in school-are less than thrilled by Cordelia's arrival. When Kate's on-again, off-again boyfriend Trevor takes an interest in Cordelia, the Sisters of Misery become determined to make her pay.

Review:
I've heard a ton of great things from this book. I agree it was fantastic. The plot was exciting, suspenseful and thrilling. It was very unpredictable and I was very curious. The plot was original, it was genuinely a neat and unique plot, exceptionally drawn out and written thoroughly. But I think that was the best part about the novel.

I had some problems with this novel.

First: I thought the characters were unreal. I didn't think they were completed well and written efficiently. I thought they could've been better, which brings me to problem two.

Second: I thought that writing the book in limited omniscient point of view was a terrible idea. I think Maddie would've been a more likable and relate able character if the story was written in first person through Maddie.

Thirdly: In some scenes of the book I felt that they were too staged. I feel like Hall could've done so much better in some scenes and make it more natural.

That said: This book was still extremely good. I really loved it. The ending was rather fantastic, exciting and thrilling . . . and. like I said above, though, a little staged. But, those things don't necessarily measure up to how high the plot and originality ranked. Those beat them and this book is really recommend, it's just some things were annoying and I was a tiny bit let down, but still, it's a great book and I CANNOT wait until the next book comes out so I can see what happens from the cliff-hanger ending! The Lost Sister by Megan Kelley Hall comes out August 2009.