Okay, special edition review for the Twilight Movie, of course I had to! 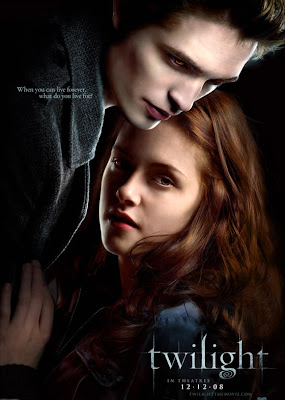 (I like this cover better even though the date wrong, ignore it.)
Okay, the movie was just beautiful, I just have to comment on the scenery, it was GORGEOUS, one of the most beautiful locations ever! The film stay so very close to the book, you can even hear a bunch of quotes from the book! It was hilarious, way more then expected. I loved it.

Kristen Stewart, I have to be honest, disappointed me. It's true. She was very uh, um, huh . . . fidgety as an actress, and I was watching her on all of her interviews yesterday on Today and Letterman and it just isn't her acting, it's her. So, it kind of bothered me. But she was clumsy, beautiful and acted like Bella.

Rob Pattinson was the PERFECT Edward. His acting was superb and just fantastic. He was beautiful, true to Edward, and like I already said, perfectperfectperfect. I just don't know what else to say about him . . .

Taylor Lautner had, like, four different spots in the film, so not really much to say about him but that I think he is a very good Jacob and I fully look forward to seeing way more of him in New Moon.

Billy Burke a.k.a. Charlie was AWESOME, he was the perfect choice for Charlie, one of my favorite characters. He was really just a hilarious character bringing humor into every scene he's in, well almost.

The Cullens: Carlisle-Peter Facinelli was a great Carlisle, he was funny, clever, and a mysterious and humorous character. Esme-Elizabeth Reeser didn't have much of a roll and she was okay, nothing really special about her. Alice-Ashley Greene was hilarious, cute, witty, and awesome loved her scenes and her pitching, plus, OMG!, look at her go! Emmett-Kellan Lutz was the perfect Emmett, PERFECT. He was hilarious and she the perfect Emmett you can think of, but I knew that already. Rosalie-Nikki Reed was very anti-Bella and showed it well, she was gorgeous like so in the book and I loved the chot of her and her 5-inch heels! Now . . . Jasper-Jackson Rathbone-uh, the worst cast. He looked like he was in pain the ENTIRE movie and he like said two words and I don't think his acting was good and uh, he just ruined the image of the perfect Jasper in my head.

The Enemies: James was the right choice, definitely. He was evil, and viscious, and cynical, and spooky. Same with Victoria. Rachelle Lafevre and Cam Gigandet were great, and Vitoria left it at a scary note!!! Laurent was weird and unusual like so and he was played good by Edi Gathegi.

The Friends: Hilarious. They like were the most hilarious, I just loved them. Mike and Jessica especially. Mike was a very straight-forward and fun character and Jess was kind of a dumb but funny and right fit for the character.

Overall: The movie was fantastic, especially the last hour of it. I especially loved the baseball scene and the ballet studio fight scene, AH! It was just PERFECT (I know that word is used a lot! But it was!)! It started right and ended right. I just loved it and anyone not having read the book will love it also because a bunch of my friends hadn't read the book, went and LOVEDLOVEDLOVED it, so if you don't plan to read it, I would so go, you'd probably like it more then us who have read the book already.

Also, there were some girls in the row in front of us with Twilight shirts on and i already asked my mom for it for Christmas and i also asked for the soundtrack! LOVED Bella's Lullaby, by the way. Also, I'll be seeing it again, next Sunday I think I planned it. Just so the hype gets down a bit more and I can see it in peace.