On The Outside: Alyson Noël

Alyson Noël is the author of numerous young adult novels and a adult novel, including Saving Zoë, Cruel Summer, Fly Me To The Moon, and the first book in the new series, The Immortals, Evermore, which is released today and is what Alyson will be talking about today. You can visit Alyson at her neat website at alysonnoel.com

While I know this probably sounds strange, the truth is, while I’m writing my books, I never really think about what its cover might look like. I never stop to contemplate what color it might be, or what image they’ll use, it just doesn’t even occur to me until sometime after I’ve turned the manuscript in. Which is also kind of weird since I’m a very visual writer and can see my characters and their world so clearly, it often feels like I’m merely transcribing the movie I see in my head.

This has pretty much been the case with the last seven books, so why would EVE 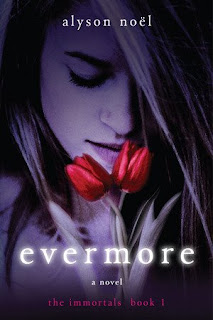 RMORE be any different? Well, it wasn’t. It was all business as usual, until my awesome editor, Rose Hilliard, called to ask me if I had any cover concepts in mind.

Not wanting to admit that I hadn’t really given it the least bit of thought, I mumbled some stuff about recent covers I admired and the reasons they worked at pulling me in . . . we talked color—Purple! I said. I love purple!! We even discussed what symbols we might use, with both of us agreeing the red tulips were hugely important.

But that was pretty much it. I went back to work on the second book in the series, BLUE MOON, and she went off to the Art Department to discuss our ideas. And then one morning, a few months later, I scrolled through my e-mails and came across one with the subject line: “EVERMORE cover!!!” clicking through faster than I ever thought possible, and it was love at first sight!

I was thrilled with the way they took our suggestions and came up with a cover that captures the story’s mood of romance and mystery just perfectly! And while I’m sure there were several other versions before they settled on the one they sent me (because there usually are), I never saw them. Though I can’t imagine it looking any different than the way it does now.

Oh, and I recently received the cover-flat in the mail, and let me tell you, with the matte and the spot-gloss, it puts the Jpeg to shame!

If any author wants more details on how you can do an On The Outside post with me, please email me at kels.m.17@gmail.com with On The Outside in the subject line and I'll get to you immediately with the details!