I Know It's Over by C.K. Kelly Martin 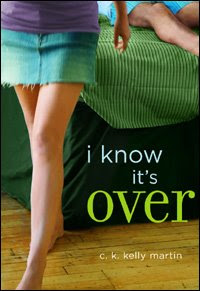 Summary (ckkellymartin.com):
Pure. Unplanned. Perfect. Those were Nick's summer plans before Sasha stepped into the picture. With the collateral damage from his parent's divorce still settling and Dani (his girl of the moment) up for nearly anything, complications are the last thing he needs.

All that changes, though, when Nick runs into Sasha at the beach in July. Suddenly he's neck-deep in a relationship and surprised to find he doesn't mind in the least. But Nick's world shifts again when Sasha breaks up with him. Then weeks later, while Nick's still reeling from the breakup, she turns up at his doorstep and tells him she's pregnant, and with his emotions and hopes crashing in around him, Nick finds himself struggling once more to understand the girl he can't stop caring for, the girl who insists that it's still over.

Review:
I Know It's Over starts out very exciting. The first chapter is in the present and the following dozen chapters are in the past leading up to what happened in the first chapter and then your in the present again. I thought that was a very nice touch to the novel, it pulls you in really quickly, then winds down for awhile and then quickly pulls you up again and keeps you there.

When reading this novel, the emotions from the characters, especially Nick's, was so strong. Nick was pulls the reader in with his emotions and the reader just can't bear to let go. One thing I thought Martin did wonderfully was write Sasha out through Nick's eyes. Martin grabbed Sasha's emotions and feelings through Nick so magnificently. The characters were proven fully equipped and very copiously thought out and divinely crafted.

Martin's writing was superbly done and the emotions she feeds from her characters and there thoughts were done so marvelously better then any books I have read recently. Hurrah! for you Miss Martin!

Now, the only reason I gave .5 points off was because of the ending. Now don't get me wrong, the ending was great, but it just kind of let me down because I knew where it was headed and I guess I just had hope for a different direction, but like I said. The ending was still amazing. It was just me who got let down just a tad because I had hope for something else. Nonetheless, this book is excellent and one you should definitely read.