Fabulous Terrible (Adventures of You) by Sophie Talbot 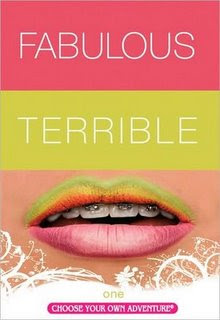 Last month you shipped off from Hatterly, your old home town, and changed lives: from foster kid to full time student at Trumbull Woodhouse, the most elite all-girls boarding school in the country. Wise move? You hope. Big change? Definitely.

From the minute you arrive on campus, the deans and faculty emphasize how special Trumbull Woodhouse girls are, how lucky you all are to be here. Sulum Puella Est Donum "Every Girl Is Gifted" goes the school motto. Since the first class graduated in 1882, TW grads have gone on to lead the most distinguished and glamorous lives possible from Wall Street CEO's (14) to Oscar-winning film stars (3) to Nobel prize winners (1). But a mystery lurks on the grounds of this revered institution. A society sworn to uphold the founder's deepest secrets has become divided. A war for power burbles just under the campus's placid calm. Is the legend true, did Founder Emma Woodhouse see the future and write down her predictions? Or is the rumored Apocryphon just some old book, the musings of a dying woman trying to control her creation from beyond the grave? Who would steal the book? And why?

In your first month at TW, as a mysterious enemy tries to undermine your every efforts to belong, you come to suspect your new Alma mater has a past as strange and troubled as you do. Both you and Trumbull Woodhouse are bent on keeping your secrets from the public eye, but as we all know, the public eye is most interested in the girl who's on top.

Talbot tells the story of 'you' as a foster kid who goes to an impressive boarding school in New England. Talbot flawlessly writes the book in second person. I have not yet come across a book that writes in second person and have it done so impeccably. Talbot does a fabulous (pun intended) job writing this book and it kept me intrigued throughout the book. 'I' went through leaving my best friend, starting at a lavish boarding school, made new best friends, and discovered something extraordinary about myself.

I pretty much loved this novel. Talbot's writing was excellent and I had a fun time reading. But. I have a few complaints. I think there where a bit too much details. I mean, you felt like you were going along with the ride, but you were a fourteen year old and then you were told what you were like, like how mature you were or or if your brave or not. It didn't feel like me, as I would of expected. It felt like a fake me. So a negative for that, and also, i thought the plot was awesome in the beginning, but in the end it spiraled downhill and became cheesy and predictable. But nonetheless, I am looking forward to the second book in the Adventures of You series. i suggest picking this one up someday, its worthwhile.