On The Outside: Michelle Zink 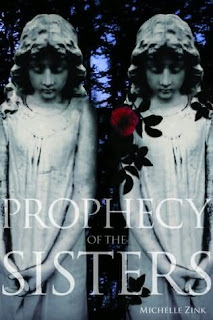 Michelle Zink is the debut author of the novel Prophecy of Sisters coming out August 1, 2009. You can visit her at her blog here. (I've seen a copy at the Border's Express here (I didn't have enough money on me!) so go now and I bet there at your local bookstore!)

When I first heard the concept for the cover of my book, Prophecy of the Sisters, I was so excited! The book is a Gothic fantasy set in 1890 and features very dark themes and a strong supernatural element. The original concept was to locate real, Victorian pins of different animals, and feature a different one on each of the three books in the Prophecy series. Book one would be a snake, book two something else, and so on.

My editor did a ton of legwork, researching gorgeous Victorian brooches and pins of various animals until she found a beautiful example. A photo shoot followed, and the designer added special effects such as a worn background, a shadow for the snake's tongue (especially cool because the actual pin doesn't have a snake's tongue, so it could only be seen in shadow), and a title treatment that was actually art, not stock font. When it was finished, the cover was striking and unusual - definitely different than every other YA title out there.

That part I loved!

But the overall effect felt a little... off to me, I guess. Maybe it was because I was accustomed to seeing spookier covers for YA fantasy or maybe it's because it just wasn't what I was expecting, but I didn't believe the cover captured the essence of the book or said anything important about its story. It seemed I was in the minority, though, because a lot of the people at the publishing house really loved it, so it was decided to send the ARCs out with the cover as-is and then consider the feedback from there.

I held my breath when the ARCs went out, in part because I *wanted* everyone to love the cover so we wouldn't have to start over and in part because, as hard as I tried, I just couldn't get 100% behind it even though I knew how hard everyone had worked on it and SO appreciated all the energy (a lot) and talent (considerable) that had gone into it.

In the end, the feedback was called "polarizing" - some people loved it and some people REALLY didn't "get it". There was enough of the latter, though that my publisher decided to rework the cover from the concept up. As funny as it sounds, I was a little sad, even though I'd had a feeling we might be better off with a different cover. The truth is, whatever your cover is and however you feel about it at first, your brain does this thing where it starts to point out all the good things about it in an effort to make it all okay, you know? So parts of the cover had grown on me, and I'd become kind of happy that it was white when so much of fantasy had a darker background. But deep down, I was happy (and a little nervous!) to be getting a new cover concept.

Little Brown worked fast to come up with a new cover, because we were getting really close to my pre-publication tour and they really wanted something solid to unveil to the booksellers and educators we would be meeting. And there's so much that goes into it. A cover has to tell you something about the story. It has to be different enough that it will stand out on the shelf. And it has to be beautiful, even when its scary, for the YA audience. Shortly before I left for tour, I got my new cover - the one you see now.

I have to say, it took me off guard at first! Again, it just wasn't what I was expecting. I think I kept expecting a Victorian girl in a fancy gown, even though I probably would have 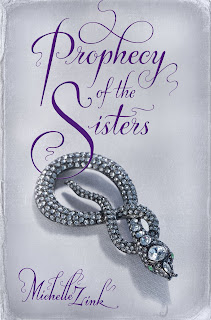 whined, "But everyone has one of thooooooose!" if that's what I'd gotten. (Sometimes I feel so sorry for editors and designers that they have to put up with us!) But the difference between this cover and the last one was that EVERYONE seemed to love this one. From the beginning, the feedback wasn't polarizing - it was more or less unanimous - this was THE cover. Featuring era-appropriate twin graveyard statues, it really spoke to the darker nature of the book and the conflict between sisters. The title font wasn't art this time, and although I hated to lose the "cool" factor associated with that, the new title font was cleaner and more Gothic. Definitely a better fit for the story itself.

I became an even bigger advocate of my cover after my pre-publication tour, because everywhere we went the booksellers and educators would say, "Is THAT the new cover?" And they loved it. Plus, when we went to Comic-COn NY with it, lots of people who came to my signing mentioned doing so strictly because of the cover. It has since been called creepy, scary, spooky, striking, intruiging, and my personal favorite, bad ass!

But it was a long road to get here and involved countless hours of work, energy, talent, and patience(!), on the part of my editor and designer. In the end, though, it was all worth it. I couldn't be happier, and I look forward to seeing how the concept will be carried forward with the next two books.

Now I get to wait for the fun part - seeing the cover in all of its final glory, special effects and all. I can't wait! I hope when you see it, you'll enjoy it even more knowing all that went into developing the perfect cover. Oh, and say a quiet thank you to editors and designers everywhere who work so hard to give us the stunning covers we sometimes take for granted.
:D