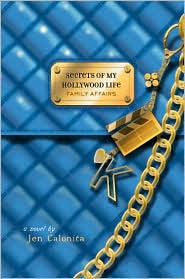 The filming for sure-to-be-blockbuster movie Pretty Young Assassins has wrapped, and teen movie star Kaitlin Burke returns to life on the set of primetime drama Family Affair. After ten seasons of filming the hit favorite TV show, Kaitlin would have thought that she could see any curveballs coming, but with a plotting new actress on set, all bets are off. The new diva, Alexis, makes even Kaitlin's long-time nemesis Skye seem like a puppy in comparison. Can Kaitlin keep her sane boyfriend, her insane job, and her composure in the face of this new star power?

Oh, I have been waiting to read this book. I own all the books in the series. I love this series and I love this book. I don't think it's my favorite though. Kaitlin doesn't seem to get any older in the book, which is a bit boring reading the same over and over.
I like how Jen Calonita added a new character to this book. Alexis is a fun character. You knew where she was coming from throughout the entire novel, but once it was reveiled you were still a bit shocked. The sweet and evil split personality is so original. You know you never get tired of reading that type.
Unlike some other Hollywood novels this gives you more of an insight to what it's like to be a teen starlet and yet theres romance with a non-celeb. There's family too. So, that's why I like this novel, otherwise it's not really my type of cake. You know what I mean? Oh, and the ending has a huge unexpected twist at the end that will sure to shake up the next book.
The next book in the Secrets Series, Paparazzi Princess, should be out this time next year and the fifth one is in the works, so keep on the look-out for them.
Read On!
Kelsey
Posted by Kelsey at 10:07:00 PM