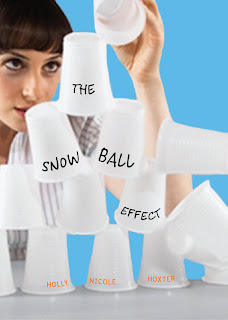 Summary:
The Snowball Effect was something I definitely did not expect. But I think the fault for that is the terrible summary to go with the book that is very misleading. I kept on waiting for something that never happened and it was a bit disappointed by that fact. Though it isn't the authors fault it's whoever wrote the summary.
Other then that fact I enjoyed The Snowball Effect. It was somewhat depressing though. Three people in Lainey's family died in less then a year, then right after she graduates she has to become a parent with the sister she never knew to care for her five year old adopted brother who has problems, and it was just all depressing. But there was something about it that I liked. It felt somewhat real, not just realistic, but real. The characters made the book feel like that I think. The characters and the writer were thanks for making the book good.
The plot was a bit of a mess for me. I just don't think the plot was strong enough because it felt like there was barely a plot there to build a story on besides the fact that her mom dies, her sister comes back to take care of her brother, and some guy trouble (Which is really where the summary is very misleading) and a 'field trip' towards of the end of the novel, about a hundred or so pages were really strewn out for the novel. It was very original, I was hoping for something to really 'wow' me about the novel but that never happened.
Overall I think with a bit more plot developement this novel could be a bunch more enjoyable, but otherwise I did enjoy this novel.
Posted by Kelsey at 6:52:00 AM