On The Outside: Cyn Balog 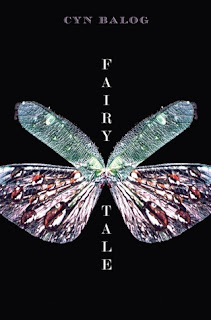 Cyn Balog is the author of the debut novel, Fairy Tale. You can visit Cyn at her website here.
~~~

The cover story for Fairy Tale is pretty simple. I had some ideas (nightmares?) about what my cover might look like, but I was really hoping for something more iconic and less literal. I had this sinking feeling they’d throw a picture of a guy with wings on the cover (see attached pic), which brought me several sleepless nights. Luckily, the second I opened that jpg on my computer, I fell in love. It’s so beautiful, and I think that nearly every day someone tells me that. In fact, I haven’t heard anything negative yet.

The title story for Fairy Tale is a bit more involved. For over a year after I sold the book in November of 2007, the plan was to call it Fairy Lust. I’d had that title, actually, before the book was written in early 2007. It just popped into my head, sounded pretty cool, and so I started wondering, “What could a book with that title be about?” Since all the books I’d ever read were about girls who learn that they’re fairies, I thought it would be fun to shake things up. In Fairy Lust, the guy would be the fairy, and his girlfriend would defend him by attempting to keep him human. So I wrote the draft and for nearly two years, I called it Fairy Lust. Everyone seemed to love the title; I heard that people at Random House were running around saying, “We love lust!”

Then, late December 2008, I got a call. It seems that quite a few bookstore reps were concerned about a book being displayed face-out on the shelves of the YA section with a word like “lust”. They asked if I would be open to changing it. Now, though I knew it would be hard to think of the book under any other title, this is my first novel, and when it comes to marketing books, I fully admit that I am a doofus. So I decided to leave that in the hands of the professionals. And so early 2009, the title was quickly changed to Fairy Tale. Since then, I have heard numerous comments about the title; some positive, some negative. Okay, Fairy Tale doesn’t raise eyebrows the way Fairy Lust does, but my novel leans more toward a sweet romance than a torrid sex romp, anyway. And my mother-in-law and the priests at my church are thrilled.
~~~
Thanks Cyn!
Posted by Kelsey at 12:00:00 AM