Jumping Off Swings by Jo Knowles 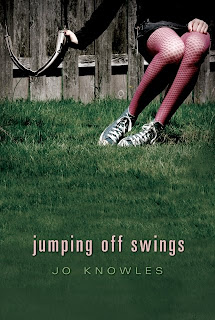 Traveling To Teens Production
Summary:
One pregnancy. Four friends. It all adds up to a profound time of change in this poignant, sensitively written YA novel.

Ellie remembers how the boys kissed her. Touched her. How they
begged for more. And when she gave it to them, she felt loved. For a
while anyway. So when Josh, an eager virgin with a troubled home life, leads her from a party to the backseat of his van, Ellie follows. But their "one-time thing" is far from perfect: Ellie gets pregnant. Josh reacts with shame and heartbreak, while their confidantes, Caleb and Corinne, deal with their own complex swirl of emotions. No matter what Ellie chooses, all four teenagers will be forced to grow up a little faster as a result. Told alternately from each character’s point of view, this deeply insightful novel explores the aftershocks of the biggest decision of one fragile girl’s life — and the realities of leaving innocence behind.
Review:
I read Knowles' first novel, Lessons From a Dead Girl, over a year ago. I liked it, though it was pretty graphic for what it was. My first impression of Knowles' was good writer and a good story-teller who wasn't afraid to go after those disturbing topics. My second impression wasn't as good as the first. Jumping Off Swings was a disappointment compared to her debut, sadly. Not saying it wasn't good, because it was, it was just not as suspenseful, not as spooky as I thought it should have been for a novel on this subject.
The novel started in a good spot. It made we anxious for where the rest of the novel would take me. But as I kept on reading I became more and more disappointed. It was just . . . flat. There was no excitement. The characters were bland. There was no suspense. Knowles' barely highlighted the pregnancy. It was there, but . . . it wasn't there. I think the novel was too short to really do anything for it.
Knowles is a good writer, yes. But she's not a great writer. I was impressed with her debut, but her sophmore novel just fell flat for me. This novel could have definitely been better if it were longer. I felt as if Knowles wrote the wrong things in the novel and she missed critical points. It was very disappointing.
Posted by Kelsey at 12:00:00 AM